In 1996 Jonathan Spitel began his formal dance studies in Argentine and Latin American folklore in Córdoba, Argentina at the age of 16. He entered the artistic company Sangre Latina in 1998, performing Argentine and Latin American folklore and tango. Jonathan moved to Buenos Aires Capital in 2008, where he began working in tango salons such as Piazzola Tango, La Cumparista, Tango Palace, La Casa de Aníbal Troilo and the Viejo Almacen. During his career he has received honorable mentions and the Latin American Prize for Dance, and was honored by Danzamérica in 2005, 2006 and 2007.  He received the Incentive Award of the city of Córdoba in 2007. In 2009 he won the World Championship of Tango Escenario in Buenos Aires, along with dance parter Betsabét Flores, enabling them to participate in shows and festivals in various countries of Europe, Asia and throughout Latin America. They have been declared guests of honor for their activities contributing to the cultural interest in the cities of Santa Fe, Jujuy and Paraná (Entre Rios). Jonathan and Betsabét are directors and choreographers of the show “A Pasos de Tango.” He serves as a juror in various subsites of the World Championship and also judges other national and international competitions, including the Buenos Aires Championship in 2015. He has also trained several couples in the World Championship of Tango in 2012, 2013, 2014 and 2015.

Teacher, dancer and choreographer. She first studied dance at the Escuela Nacional de Danzas. For many years she was part of the Ballet Folklórico de Santiago Ayala “El Chucaro” y Norma Viola. Lubiz studied tango with Antonio Todaro, Pepito Avellaneda, Los Dinzel and La Negra Margarita, and has taught tango since 1983. She has also explored other dance forms, including jazz and flamenco, in addition to studying theater. Lubiz took part in notable shows such as Tango Emoción, Romance de Barrio, Los Grandes del Tango Argentino, and Una rosa para el Señor Tango. She participated in very successful tours of the United States, Japan, Canada, Germany, Australia, Netherlands, Chile, Brazil and Uruguay. Ms. Lubiz was the artistic director of the World Tango Festival, organized in Buenos Aires. Today she teaches follower role technique at the Escuela Argentina de Tango and at her own dance studio. In her studio Lubiz presents her own exclusive productions and exhibitions, also operates a tango shoe shop.  She has been a member of La Compañía del Maestro Mariano Mores, which performs in Argentina and throughout the world. She is, since 2010, the godmother of the Queer Tango Festival of Buenos AIres 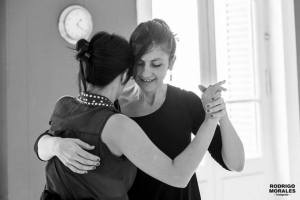 Mariana Docampo is the founder of the weekly Tango Queer Milonga of Buenos Aires, and is co-producer of the International Queer Tango Festival of Buenos Aires, presented annually since 2007. She is a writer and teacher of tango and literature, and received her B.A. from the University of Buenos Aires, specializing in gender studies. She has published three books of fiction (Al borde del Tapiz, El Molino and La fe) as well as other writings included in anthologies. She edited the collection “Las Antiguas,” published by Buena Vista, dedicated to reviving interest in the works of historic women authors of Argentina. She is the author of the essay “Queer Tango,” published on the web in 2006 and cited or reproduced in many magazines  and books throughout the world. She studied with tango masters in a range of styles and trained in a variety of the most traditional milongas of Buenos Aires, expanding her technique of tango salón, and tango nuevo. Drawing upon her experience in traditional tango, she focused her attention on the possibilities for changing the roles of partners within the dance itself. This approach allowed her to explore the dynamics of equal communication between dance partners, and inspired a series of new seminars, prácticas and milongas beginning in 2005 (Milonga de Mujeres, El Desvío, Prácticas Tango Queer). Currently, she teaches tango and is the producer of the Tango Queer Milonga of Buenos Aires as well as other events and festivities. She was invited to teach at the International Queer Tango Festival of Hamburg in 2006 and at the International Queer Tango Festival of Copenhagen in 2009. In 2011 she served as a guest teacher and dancer at the First International Queer Tango Festival of Berlin. She has also offered tango workshops in Stockholm, Zurich, Marseille, Nice, Le Hague, Preston, Brighton and London. http://www.tangoqueer.com / 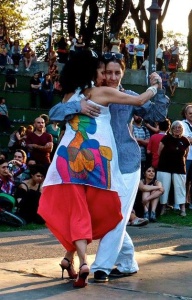 Soledad Nani is a dancer, continuous student, and teacher of tango.
She began to dance tango at the age of 21, and from the beginning, was interested in, and practiced, both roles simultaneously. She graduated from the Educational Center of Buenos Aires Tango (University of Tango). Among the teachers that were and are especially significant to her: Rodolfo Dinzel, Olga Besio and Juan Miguel Exposito.
In 2004, she began to teach in various neighborhood and cultural centers of greater Buenos Aires.
She has participated in state community programs, teaching at public schools and health centers for seniors, young people, children, and women in situations of gender violence: “Tango by and for Women” from the Community Health Program for Women, or “Recreation of the Arts”.
Since 2008 she has been an adjunct teacher at Espacio Tango Queer. 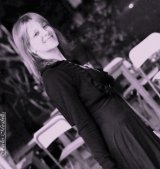 Gabriela began her dance career in classical and jazz, participating in several musicals. In 1986 she discovered tango, and has since integrated it in her performances, currently in the cast of the company “Mariano Mores” as prima ballerina, with Eduardo Perez; and is also Director of the dance group. She performed in shows and concerts with the orchestras of José Colangelo, Las Tangueras, Los Reyes del Tango and others. She also shared the stage with Libertad Lamarque, Julio Iglesias, Estela Raval, and Los 5 Latinos, among others. She has traveled to more than 25 countries around the world showing her dance and transmitting everything she knows through her teaching at workshops, festivals, milongas and private classes, demonstrating both male and female roles. She danced the tango at Royal Festival Hall (London), Royal Theater Carré (Amsterdam,) the Waldorf Astoria (New York City), Caesar’s Palace (Las Vegas and Atlantic City) Canecão (Rio de Janeiro), the World Economic Forum (Davos), and for the Queen of England. She has had successful seasons within Argentina, especially in the city of Buenos Aires, performing in internationally recognized venues including the Teatro Colón, Luna Park, Estadio Obras, and the Gran Rex, Opera and Metropolitan theaters; also in major hotels and dinner theaters, including Sheraton, Intercontinental, Hilton, Plaza Hotel, the Park Plaza chain, Libertador, Michelángelo and La Ventana. She has participated as a judge for the tango salón and tango escenario categories at the World Championship and Metropolitan competition of Buenos Aires, and as a teacher at the Festival of Tango since 2003. Since 2002 she has organized the well-known and prestigious authentic milonga in Buenos Aires, La Baldosa. Her specialty is the MILONGA rhythm, and her classes are taught in the most recognized milongas and schools of Buenos Aires. They are praised for her teaching method and excellent pedagogy. They say that GABRIELA loves TANGO, but her passion is the MILONGA CON TRASPIE. 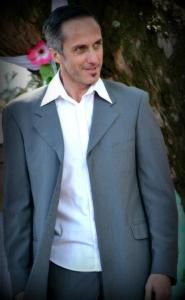 Augusto Balizano is the founder and producer of the milonga La Marshall and is one of the organizers of the International Queer Tango Festival of Buenos Aires. He belongs to the dance group Propuesta 5. In 1997 he received his professional degree in graphic design from the University of Buenos Aires. He became a tango master and performer under the direction of Claudia Bozzo. His teachers also included Claudio González in tango, Carina Passaglini in the technique of dance partnering, and Soledad Pérez in contemporary dance. He joined the theater company Caviar under the direction of Jean Francois Casanovas in the productions Viva Caviar and Hot Vudú. He was co-director with Pacha Brandolino of the company La Terna, directing his first work of dance theater, Quien es Medea? with tango music. The company toured internationally to Germany, where it won first place in the Carnival of Culture in Berlin, and to England, where the group appeared in the Pegasus Theatre at Oxford. He formed the first professional gay tango couple, touring Germany, England, Denmark and Italy. He was also invited to participate in the International Queer Tango Festivals of Hamburg, Stockholm and Copenhagen. With Elizabeth Guerrero he performed in Punta del Este, Uruguay and also teaches tango classes with her at the School of Social Dance. In 2011 he traveled to Berlin to be a guest lecturer at the first International Queer Tango Festival of Berlin. http://www.lamarshallmilonga.com.ar 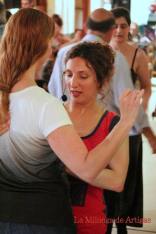 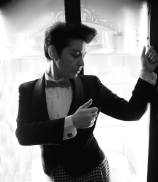 Lucas De BuenosAires was taught tango in true porteño fashion, first by family in Buenos Aires, and then in its milongas. A lifetime later, that knowledge and passion continues to be explored and shared. Lucas continues to study both in Buenos Aires and through frequent travel, seeking exposure to everything from traditional canyengue to intercambio/fusion.Since beginning to teach in Buenos Aires, Lucas has brought tango to the people of Barcelona, Berlin, Boston, Copenhagen, Gothenburg, Hamburg, London, Mexico City, Milan, Moscow, New York, Paris, Portland, Reykjavik, Rome, San Francisco, Seattle, St. Petersburg, Stockholm, The Hague, Valencia, and Zürich. An avid follower and leader, this versatile dancer has been a guest artist, repeat instructor and performer at International Festivals in Berlin, London, Mexico, New York, San Francisco, Montreal, Stockholm, Buenos Aires, at both the “Festival Internacional de Tango Queer ” and “The Marathon,” the Portland Alternative Tango Festival, and St. Petersburg, Russia.Lucas De BuenosAires specializes in original and creative classes, such as “World Cup Tango (Tango lessons from Fútbol),” “Can’t even Think Straight (Navigation for switch dancers),” “Boleos for Boys,” “What’s up with Biagi?” and the well known “First Steps to Tango Heaven” in Berlin. A consummate club kid since the age of 13, Lucas has never shied away from adventure. Lucas continues to seek opportunities for creative expression and made a first appearance on the big screen in a 2014 feature film followed by a music video in Moscow in 2016 and a short film in Berlin in 2017.