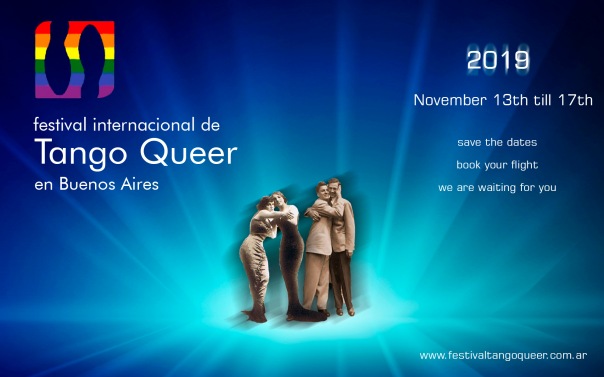 At the most important venues in Buenos Aires, the most prestigious teachers, dancers and Tango orchestras from Buenos Aires

Founded in 2007 by Mariana Docampo, Roxana Gargano and Augusto Balizano the annual International Queer Tango Festival of Buenos Aires attracts participants locally and internationally devoted to queer tango: teachers, producers, academics, musicians, dancers and students from all over the world.

The mission of the Festival is to dance tango without the restriction of fixed roles normally determined by gender. That’s why the event is not oriented exclusively to same-sex couples, but to a truly open tango community, encouraging new forms of expression within a living tradition of music and dance. 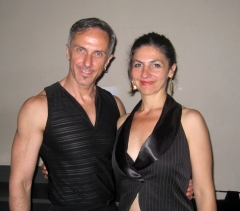 Mariana Docampo is the founder of the Tango Queer milonga in Buenos Aires and is one of the organizers of the city’s annual International Queer Tango Festival. She is a writer and teacher of tango and literature, and received her Bachelor of Arts in Literature from the University of Buenos Aires, specializing in gender studies. She has published a book of short stories Al borde del tapiz (“At the Edge of the Tapestry”, 2001), the novel El Molino (“The Mill”, 2007), and a second volume of short stories La fe (“The Faith”, 2011). Her essay “Queer Tango” was published and quoted in numerous magazines and national and international publications. She studied Tango Salón, Tango Milonguero and Tango Nuevo with a number of master tango teachers, and was trained in the milongas of Buenos Aires. Drawing from her experience in traditional tango, she started to investigate the possibility of changing roles while dancing, a technique that enabled her to explore the dynamics of egalitarian communication between dance partners. This exploration inspired seminars, practice sessions and milongas that have been produced in Buenos Aires ever since (Milonga de Mujeres, El Desvío, Prácticas Tango Queer). She is currently the teacher and producer of the Tango Queer milonga of Buenos Aires, as well as other events and parties. In 2006 she was invited to teach at the International Queer Tango Festival of Hamburg and in 2009 she taught at the International Queer Tango Festival of Copenhagen. She has also given tango workshops in Stockholm, Berlin, Nice and Marseille, London and Brighton. In 2011 she travels to Berlin as a guest teacher in the First Queer Tango Festival of Berlin. http://www.tangoqueer.com /www.buenosairestangoqueer.blogspot.com

Augusto Balizano is the founder and producer of the milonga La Marshall and is one of the organizers of the International Queer Tango Festival of Buenos Aires. In 1997 he received his professional degree in graphic design from the University of Buenos Aires. He became a tango master and performer under the direction of Claudia Bozzo. His teachers also included Claudio González, Julio Balmaceda and Corina De La Rosa, Gustavo Naveira and Giselle Anne in tango, Carina Passaglini in the technique of dance partnering, and Soledad Pérez in contemporary dance. He joined the theater company Caviar under the direction of Jean Francois Casanovas in the productions Viva Caviar and Hot Vudú. He was co-director with Pacha Brandolino of the company La Terna, directing his first work of dance theater, Quien es Medea? with tango music. The company toured internationally to Germany, where it won first place in the Carnival of Culture in Berlin, and to England, where the group appeared in the Pegasus Theatre at Oxford.Together with Miguel Moyano he formed the first professional gay tango couple performing at the most popular milongas of Buenos Aires, touring Germany, England, Denmark and Italy. They were also invited to participate in the International Queer Tango Festivals of Hamburg, Stockholm and Copenhagen. He created together with Claudio Gonzalez, Miguel Moyano, Fernando Gracia and Paula Rubín the dancing company Propuesta 5 performing at most preigious milongas of Buenos Aires and at the milonga Ballhaus Rixdorf in Berlin, Germany. He was part of the jury at ,both the Metropolitano and Mundial Tango Championships organized in Buenos Aires. With Elizabeth Guerrero he performed in Punta del Este, Uruguay and it teaches tango classes at the School of Social Dance. For his expierence and dedication to the integration of Tango into the gay comunity, he was included in the book ” The History of Tango”, published by Corregidor in 2011. In 2011 he traveled to Berlin to be a guest lecturer at the first International Queer Tango Festival of Berlinand also 2012, 2013, 2014, 2015 and 2016 representing the city of Buenos Aires. He toured Europe in 2013 and 2014 visiting the cities of  Berlin, Hamburg, The Hague, Paris, Venice, Larnaca (Cyprus), Copenhaguen and St. Petesburg and Moscow in Russia.In 2016 and 2017 he was invited to the Queer Tango Festival in the city of New York were he was honored by Friends Of Tango because of his support to argentinian Tango . http://www.lamarshallmilonga.com.ar

Our videos dancing together in Copenhagen: